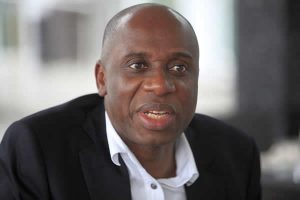 Minister of Transport, Rotimi Amaechi has blasted the Former president, Goodluck Jonathan,saying he did not do anything to the Igbo community even though they massively supported him in 2011.

The minister added that those who served under Jonathan from the South-east region should be ashamed of themselves because “they were seeing the president five times in a day” but could not get key roads constructed.

“The Igbos gave Jonathan support, what did he do? Of course! Nothing!”, he said in Lagos at a Forum. GEJ went to Onitsha and danced and promised to construct Onitsha bridge. Right? After that nothing happened.

The Port Harcourt-Owerri road was terrible. One day I made the mistake as governor to try to go to Owerri and I passed through Aba. I wept. Now we are constructing that road; it may not be at the speed that you want but we are constructing the road. The next road I mentioned is the Enugu-Onitsha.

But the man who doesn’t talk at all; who didn’t make promise and he is doing it, which one do you prefer? Don’t be deceived by those who depended on government alone for survival.”