Home News Feed See How Wife Of A Soldier Cut Up Her New Baby
Facebook
Twitter
WhatsApp
In what will come across as a really shocking development, a woman has killed her own baby in the most brutal way. 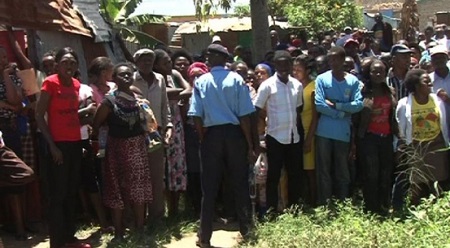 A report by SDE has shown that a Kenyan woman has been dragged to court for cutting out the tongue and intestines of her six month old baby boy.
Police allege that Irene Mbithe, 31, and who is married to a miltary officer, committed the offence in February, 2017 at Kanguruwe area in Embakasi, Nairobi.
The court heard that Mbithe has two children, one of them a girl from a previous marriage. The second child, whom she is accused of killing, was a boy she got in her second marriage.
Police allege that the baby boy had developed a habit of crying a lot whenever his father carried him, something that seemed to trouble Mbithe.
In an attempt to find out why her baby often cried whenever his dad had him, she allegedly took the baby to her cousin in Umoja for prayers. This, the court heard, she did when her husband left the city to visit his rural home.
Police said the women got into a prayer session — and locked the door from inside. Police said that Mbithe was convinced her baby was possessed, and needed to be cleansed.
Neighbours who heard the wailing of the baby and loud prayers coming from the house sought the intervention of the plot’s caretaker.
The caretaker on walking to the room, is said to have seen Mbithe who asked him to help take her baby to the hospital.
Police say the baby was already dead.
She denied the charges and was released on a cash bail of Sh100,000 or a bond of Sh200,000.
The case will be heard on September 18.