A retired soldier of the Nigerian Army, identified as Joseph Oloruntoju, on Saturday slumped and died after he watched the Bafana Bafana of South Africa defeat the Super Eagles of Nigeria. 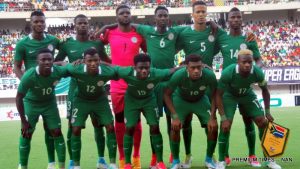 The Super Eagles lost 2-0 to the South African side.

Oloruntoju, who was said to have retired from the army as a sergeant, reportedly left his residence at Ajipowo area of Akure and went to the Owena Army Barracks to watch the match along with his friends.

A source described the deceased as  strong suppoter of Nigerian football, adding that he slumped shortly after the Eagles conceded the second goal.

He was reportedly rushed to an undisclosed private hospital where he was confirmed dead.

The Public Relations Officer of the 32 Artillery Brigade of the Nigeria Army, Akure, Captain Ojo Adelegan, who confirmed the incident, said the man slumped in the barracks, but was not while watching football in the barracks.

He said, “He is a retired sergeant. He  has a shop at our mammy market (in the barracks).

“It was discovered that his blood pressure was overshot. It was while our doctors were saving his life that he gave up the ghost.