Student Nurse Threatened to Commit Suicide After Being Expelled | Photo 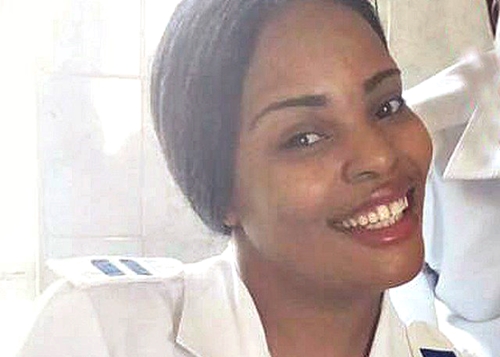 A 2nd-year student nurse expelled from Gweru Provincial Hospital in Zimbabwe along with three of her colleagues for a series of misdemeanours, has allegedly threatened to commit suicide, claiming she had been unfairly dismissed.
Miss Elain Madonho allegedly posted a suicide note on a WhatsApp chat group on Sunday claiming that she had been dismissed unfairly from the institution’s nursing school.
She is one of the four student nurses who include Miss Sharon Ndiva, Miss Ingrid Wombasha and Miss Shumirai Mandiga who were expelled from the hospital’s nursing school on May 26 after appearing before a board that was set up by the Provincial Medical Director Dr Simon Nyandundu.
The four student nurses were allegedly facing charges that include forging the signature of a supervisor at a clinic where they were attached, incompetence and insubordination after refusing to write a report.
Following their expulsion, Miss Madonho on Sunday took to social media to pour out her heart, saying she was taking her life.
The woman was subsequently not reachable to her friends and efforts to contact her yesterday were not successful, but hospital authorities got in touch with her mother who lives in Harare and she allegedly said her daughter was at home.
It could not be established immediately if the student was dissuaded by someone from committing suicide, had faked the planned suicide or just changed her mind.
In her post which has gone viral, Ms Madonho said the expulsion had destroyed her life, adding that the hospital’s Medical Superintendent Dr Fabian Mashingaidze failed to give her a second chance.
Ms Madonho accused the nursing school of protecting other students while expelling others for trivial crimes.

“From what I heard years before I started attending ur (your) institution, all I heard were praises. Why couldn’t you hear me if what I heard was true?? I gave u my voice and u shut ur (your) ears. Why did u let people over ride you and yet you could have decided on ur (your) own?? Where my grades not good enough to prove to you that I was serious with nursing?? 1 mistake and u have taken away my life? You allowed Christabel to continue even after falling pregnant and giving birth because she is the matron’s daughter, Mupoperi was involved in so many school fights but she has qualified,” Ms Madanho allegedly wrote.
“Exactly wat have u seen in me that u felt it fit to steal my life away. Students only complete their competencies when results are out but I wasn’t given that chance. The whole class was given 2 weeks but I hardly got 2 days. What did I do that I was not given e (the) chance to correct my mistake like e rest of e class?? Anyways I forgive u and hope u find the Lord’s mercy because u really need it. You can explain to my daughter where her mother is.”
Dr Mashingaidze confirmed that the four students were expelled from the nursing school last week. He said they heard that one of the students had committed suicide but when they checked with the mother, they were told that she was home.
“Yes there are four girls who were expelled from school after they were found guilty on some charges that were laid against them. It’s too early to comment on the matter because they still have two weeks to appeal against the judgment. I don’t know of any student that has committed suicide as the hospital hasn’t been availed with such information,” he said, adding that there was no room for crooks or incompetence in the medical field.