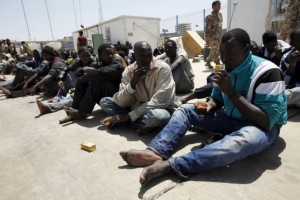 Three migrants died in the Mediterranean on Monday night, a German aid group said, during Italian-led rescue operations in which thousands more were pulled to safety from rickety boats.

About 5,000 migrants were picked up off the Libyan coast by emergency services, Italy’s navy, aid groups and private boats on Monday, and rescues were continuing on Tuesday, according to an Italian coastguard spokesman.

“Despite all efforts, three people died from a sinking rubber boat” and rescue boats in the area are struggling to cope, German humanitarian group, Jugend Rettet, said.

Jugend Rettet (Rescuing Youth) is one of about nine aid groups patrolling seas into which people traffickers have sent more than half a million refugees and migrants on highly dangerous voyages towards Europe over the past four years.

“We reached the capacity limit of our ship, while our crew is seeing more boats on the horizon. Currently, all vessels are overloaded,” Rettet added.

The total number of migrants reaching Europe by sea so far this year is less than half that counted in the same period of 2016, thanks to a deal between the EU and Turkey which blocked a once-busy route to Greece, but the number coming to Italy has risen.

About 72,000 migrants arrived in Italy on the perilous route from Libya between January 1 and June 21, roughly 20 per cent more than in 2016, and more than 2,000 died on the way, according to the International Organization for Migration.