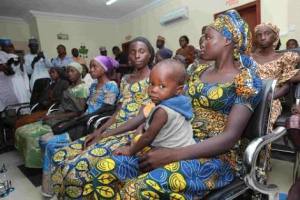 Confusion has taken over an entire community, near Chibok in Borno State, as news filtered out that two of the 70 girls rescued from the Book Haram enclave had returned to their men whom they were married off to by the militant leadership in the notorious Sambisa Forest.

One of the girls, Aisha, is said to have disappeared with her son, after receiving a series  of phone calls from unidentified caller.

Their immediated families is still left on a state of shock after sources calld to tell them that the girls had confided on them that they might be forced to  head back to the dreaded forest to be with their terrorists-turned  lovers.

Recall that the rescued girls, who went through some rehabilitation programme, under the supervision of the Federal Ministry of Women Affairs, were released to their families after spending close to one month after regaining their freedom from three years of captivity  in the forest.

But an official of the Red Cross, who would not want to he named said the terrirsts had radicalised  the girls in such a way that it would take some years to del radicalse them as to the point of having them fully regain their state of mind.

He said the best way to achieve that is to take the freed girls out of the same environment that was part of their ordeal.

“Even while in the rehabilitation camp, you could hear some of them make some complimentary remarks on their ‘husbsnds’, which is an indication that the jihadists must have created some psychological fears on the girils, including the feeling of being unsafe outsife their enclave.” he said.

This could be confirmed from what 25-year Aisha, who claimed to be happily married to one of the prominent Boko Haram commander.

Aisha was quoted as saying she was treated like a Queen by her ‘husband’ as all other girls hevequally married were serving her before the negotiation that gave her freedom came about.

Yerima, 22. the younger sister to Aisha disclosed that :”Before she left house, she had received a phone call from a woman who was with her in the governmental organised programme,”

She said since she disappeared back her phobe had been switched off.

Yerima stated that bher elder sister was always cherishing a few things that she came with from the Sambusa Forest, including her sim card and phone believed to have been govevto her as a parting shot by her ‘hysband’.

It was furthered gathered that the allure of power may be another factor pushing some if the girls to be desirous to return.back to the forest.