Home News Feed Watch Survivor of Sosoliso Plane Crash, Kechi Wow Crowd
Facebook
Twitter
WhatsApp
Kechi Okwuchi, one of the two survivors of the 2005 Sosoliso plane crash, caught the attention of judges at the 2017 America’s Got Talent as she melt the hearts of the audience at the show. 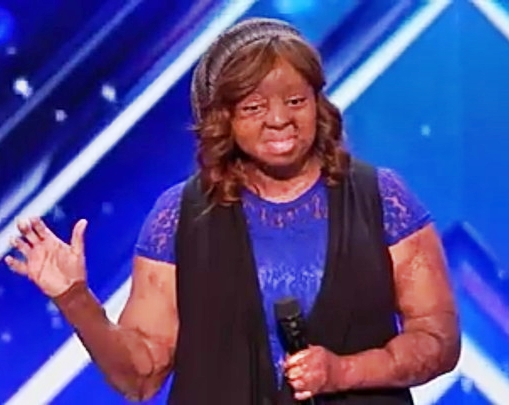 Sosoliso plane crash survivor, Kechi Okwuchi this week gave an emotional audition on season 12 of America’s Got Talent, DailyTrust reports.
Before singing her version of Ed Sheeran’s ‘Thinking out Loud’ she narrated to the judges and audience how her love for singing began.
‘I want to share my voice with AGT. I was in a plane crash when I was 16 years old, which took the life of 107 out of 109, which left two survivors. I was one of the two survivors.”
Responding to Simeon Cowell’s question on how she has managed to deal with the trauma, she said, “Lying down in the hospital bed with bandages from head to foot, music was my escape and that’s why it means so much to me.”
At the end of her song, kechi got a standing ovation from the judges and audience, some teary-eyed. Fans of the America’s Got Talent page were thrilled by her performance.
Prabha Verma  said, “What a girl to have come out of such a tragedy and still standing so tall and strong. She has to be someone special”.
Another fan, Gu Hai , said, “So lovely voice I love her She gives me inspiration Life is not fair But we have to make the best way to live Keep it up. I want to see more of her.”
Kechi, who after several surgeries graduated with a First Class degree from University of Thomas Houston, Texas on May 16th, 2015 was also inducted into 6 academic honor societies.
She was the most outstanding student for her major in Economics and has already been accepted into graduate school for her MBA.
Ms. Okwuchi survived the ill-fated Port Harcourt bound flight which crashed on the runway and killed 107 people, including her close friend who was sitting next to her and late Pastor Bimbo Odukoya.
Kechi has had more than 100 surgeries, including skin grafts in the US as a result of the severe burns all over her body. Despite these challenges, she hasn’t stopped reaching for greatness.