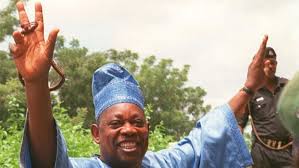 According to reports from the Presidency, they won’t be an easy give in to immotalisation of Late MKO. Abiola,despite the growing calls on the Federal Government to immortalise the winner of the June 12, 1993 presidential election, late Chief Moshood Abiola, the present administration does not have any current plan to do so.

The House of Representatives had during the week joined groups and individuals who have been calling on the government to immortalise the winner of the election adjudged as the fairest and freest in the nation’s history but annulled by the military leader, Ibrahim Babangida.

The lower chamber of the National Assembly had at its plenary presided over by the Speaker, Yakubu Dogara, directed the executive arm to confer on Abiola the highest national honour post-humously in recognition of his unprecedented contributions and sacrifice to the unity, peace and progress of the nation.

The lawmakers thereby directed its Committee on Legislative Compliance to ensure enforcement and report back to the House in three weeks’ time.

But a top government official told our correspondent on the condition of anonymity on Friday that he is not aware of any plan by the present administration to mmortalise Abiola.

The government official said, “I am not aware of any plan to immortalise the late politician.

“Again, the question to be asked is that for how long will Nigerians continue to be fooled?

“Many of those making these calls have at some points held executive positions either at the Federal Government level or at state level. What did they do while holding those offices to immortalise Abiola?

“I am sure you know that this last anniversary was not the first June 12 anniversary, so why this pressure?

“They should not keep putting unnecessary pressure on President Buhari. We should be asking them what they did when they had the opportunity of doing something on the matter.”