Home National News We will rather die, than be paraded before newsmen – Armed robbers
Facebook
Twitter
WhatsApp 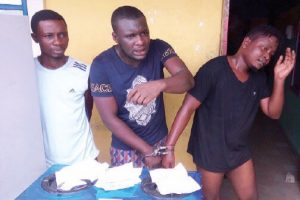 Policemen had a tough time yesterday, as three armed robbery suspects identified as Charles Harry, John James and Frank Anyaegbulem, as they vowed that they were ready to be shot dead than allow themselves to be paraded before newsmen.

According to Punchng, they were arrested on Thursday behind a bar located at Mbaka Town in Rumuolumeni, where they were engaged in drinking and smoking of Indian hemp.

On searching a hidden apartment behind the bar, the policemen, recovered various arms and ammunition. Efforts made by the policemen to parade them were not successful as the suspects insisted that they were ready to be shot dead than to be paraded.

One of the suspects said, “I did not commit any crime. I will not allow myself to be paraded. I’m ready to be shot dead here than allow myself to stand at that place (paraded).”

The suspects also refused to speak with newsmen, who wanted to get their own part of the story and why they were involved in armed robbery.