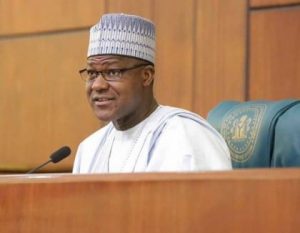 Speaker of the House of Representatives, Yakubu Dogara, on Thursday said the National Assembly has powers to introduce new projects to the federal budget, or remove proposed items.

Mr. Dogara stated this while responding to a motion on matters of privilege moved by Lawal Abubakar (APC – Adamawa) at the plenary on Thursday.

The motion was in response to a statement credited to Acting President Yemi Osinbajo, who was quoted to have said on two occasions that the National Assembly had no powers to introduce new projects to the budget before passing it.

Mr. Dogara argued that the framers of the Constitution vested the powers of law making in the legislature, implementation in the executive, and interpretation in the judiciary.

“A declaration as to which of the arms has the power and rights, in as much as it is related to the interpretation of the law, is the function of the judiciary and not of the executive,” he said.

Mr. Dogara added that the Appropriation Act is a law enacted by the parliament and that public officers including the president and his ministers, had sworn to uphold the Constitution.

He said the refusal or failure to implement the budget is a violation of the Constitution which has consequences.

“We are men of honour. Whether legislators or executive, we are bound by the oath of office to faithfully execute that law and in the case of the executive, if it is not done, all of us know the very consequences. I don’t want to call it by its name, we know the consequences,” he said.

The Speaker also stated that in the event of refusal to assent to any bill by the Executive, the constitution empowers the National Assembly to override such veto in the interest of the public.

The Speaker added that the House under his leadership would not be a rubber-stamp to the Executive as it would do everything to uphold and protect the independence of the legislature.