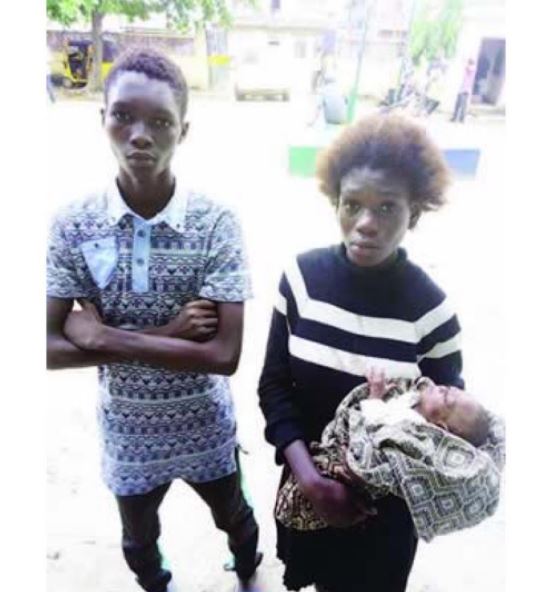 A 19 year old girl identified as Ayomide Adebayo has been arrested for allegedly dumping her 2-months-old baby in a bush in Ikorodu.

Adebayo who is a secondary school cert holder was allegedly impregnated by one Martins Tewogbade, who lives in the Bariga area of the state.

She then gave birth on April 30 at a private hospital in the neighbourhood, but Tewogbade’s parents reportedly rejected the baby and she subsequently relocated with the child to a friend’s house in Igbode, Ogun State.

Adebayo reportedly approached one Mrs. Joke Fatai, a worker at a Cherubim and Seraphim Church in the town sometime in May 2017 and begged her to take custody of the child. The baby was in the care of Mrs Fatai, until Saturday, June 10, when Adebayo went to withdraw her.

She was said to have tied the baby’s mouth and nose, dumped her in the bush and returned to Bariga, telling people that the child was dead. It was learnt that the baby was found by some members of a vigilance group in the early hours of Sunday in a bush in Ikorodu and was later reunited with Fatai.

Adebayo was eventually traced to Bariga. A resident of Bariga, Yusuf Tolagbe, said an angry crowd wanted to beat up the mother, but for the intervention of a child rights organisation in the area, Child Protection Network.

“Adebayo’s mother died shortly after giving birth to her. Her father’s whereabouts is unknown. She was living with an elderly man. Last year, the man observed that she was pregnant.

After prodding her, she said it was Tewogbade, an apprentice, that impregnated her. But the boy’s parent did not accept the pregnancy, claiming that it belonged to a taxi driver, who they usually saw her with.”

The Coordinator, Child Protection Network, Toyin Okanlawon, said the mother and Tewogbade had been transferred to the Gender Unit of the Lagos State Police Command’s Headquarters in Ikeja, Lagos.

The spokesperson for the command, ASP Olarinde Famous-Cole, said the police would work with the state government to ensure the safe custody of the baby, while Adebayo and Tewogbola were under investigations.