A 19-year-old Nigerian girl, Cynthia Anurika  Uzochukwu, who hoped to become a doctor after scoring 233 in JAMB, reportedly died on June 15th, and according to some of her friends who wrote tributes to her on social media, she suffered from Malaria and Typhoid before her death.

The deceased’s brother, Uzochukwu Pascal, who her ambition to become a medical doctor wrote;

“My sis Cynthia Uzochukwu make her jamb n wen she was alive she told me brother I will become a doctor..to treat mum n my siblings…I laugh at her n she say brother u will see it…now am seeing dat u re really a doctor bcos u re on step u front….am always proud of u,I will always love u Dr Cynthia Anurika Uzochukwu” he captioned a photo of her JAMB result. 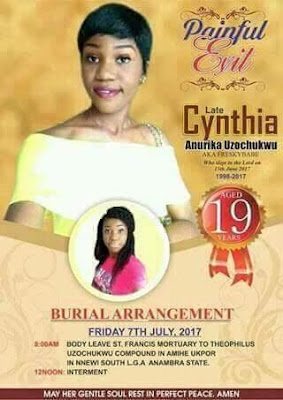 “I thank God for my life. Some people did not make it last night but I did. God you are awesome. Happy Sunday Pals”.

She will however be buried on Friday, July 7, in her hometown Amihe Ukpor in Nnewi South Local Government Area of Anambra State. Here are some tributes written to her;