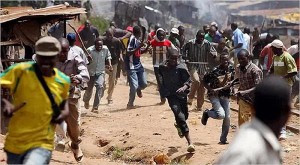 Two youths have been confirmed dead by the Niger State Police Command  in a clash between vigilance and youth groups in Angwan Yaman in Kontagora LGA of the state.

Deputy Superintendent of Police (DSP) Bala Elkana, who confirmed the incident to newsmen in Minna on Friday, said it occurred on Thursday.

“Only two people died while five others sustained injuries, with one of the youths a female, critically injured,” he said.

Elkana said that the clash was caused by the death of a 17-old boy who was allegedly tortured by members of the vigilance group.

He added that death of the boy led to violent demonstration by the youths in the area against the vigilance group which led to the death of the second victim.

Elkanah said that the second victim, a 20- year old man, was killed when members of the vigilance group used firearms to disperse the protesting youths.

He said that anti-riot police were drafted to the area to restore peace and bring the demonstration under control.

He said that the protesting youths attempted to burn the head office of the vigilance group in Kontagora.

He said that two personnel of the vigilance group had been arrested by the police for arresting and torturing the 17-year old boy.

He added that investigation was on to arrest other people connected with the incident.

Elkanah said: “we have ordered the arrest of members of the vigilance group who were alleged to have arrested, kept and tortured the young man as they have no power to do so.

“There is no law authorising them to detain anybody talkless of torturing the person.

“They only have the power to arrest anyone who commit an offence in their presence and hand him over to the police.

“For keeping the deceased youth in their detention camp and torturing him, they will face the wrath of the law.

“If his death is linked to the torture, then they will be charged with culpable homicide which is punishable with death.

“So far, two persons have been arrested and we are still investigating to get the rest involved.’’

He said that the youths would also face the wrath of the law for taking law into their hands by attempting to burn down the office and vehicle of the vigilance group.

“The youths should have reported the incident to the police instead of taking the law into their hands,” he said.