A 20 year old Kenyan lady, Elizabeth Wanguy Mathenge has been arrested after she reportedly stole valuables from a club goer whom she offered PK chewing gum laced with drugs. 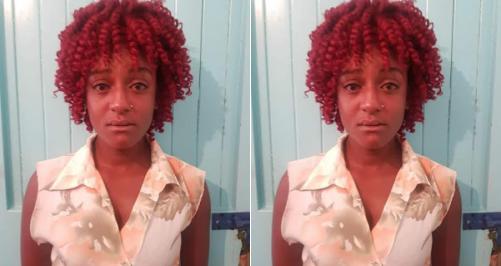 According to report, Elizabeth drugged her victim and made away with some of his belongings including cash, phones, liquor and more items.

Below is the full statement issued by the police Friday, July 21.

We are holding one Elizabeth Wangui Mathenge aged 20 years, a resident of Dandora for the offence of stealing.
In brief, on the 3rd day of July 2017, she went to Club 1824 along Langata Road and met with the complainant in this matter who was having drinks at the said club.

The complainant agreed and they all boarded the Taxi and sat at the rear seat. While inside the Taxi, the lady removed a PK Chewing gum and took the first pellet and gave it to the complainant who took the next pellet in the PK pack.

He then started to feel dizzy and couldn’t remember anything else untill when he woke up the next day around noon in his house and found most of his electronic goods, mobile phones, cologne and liquor missing. The lady was also missing.

He reported the matter and we immediately started our investigations. We summoned the Taxi driver who informed us that the lady called him and he dropped her at OTC stage just about an hour after he had dropped them. He gave us the number and we did a telephone exploitation which led to her arrest this morning in Dandora.

Upon interrogation she confessed that she buys a drug called Domicam which she dilutes and makes a thick paste then drops the PK pellets.

Operations underway to trace the people who supply her with the drugs and the receivers of the stolen goods.

A search was conducted and the items which she stole were recovered from her house in Dandora. The complainant came and identified them.