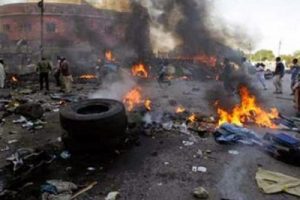 A 12-year old Fulani who breeds  cattle was killed in a bomb blast at Muna Delti area of Jere Local Government Council of Borno State on Saturday.

A witness, Grema Bana, said that the incident occurred at about 4:45 PM, at one of the pastoralist hamlets in the area.

Bana said that the deceased and his brother were returning home after taking out the cattle to a nearby forest for grazing.

According to him, an Improvised Explosive Devise (IED) was said to have been strapped to one of the boys by suspected Boko Haram insurgents.

“The bomb detonated at the entrance of the boys’ residence. One of them was killed and the other sustained serious injuries.

“The wounded boy was referred to the Specialist Hospital, Maiduguri for medical attention, “ he said.

A competent source at the State Emergency Management Agency (SEMA), confirmed the incident.

The source said that only the two boys were affected in the blast.

It added that the Agency had deployed Emergency Rapid Response team to evacuate the dead and provide immediate medical assistance to the injured.