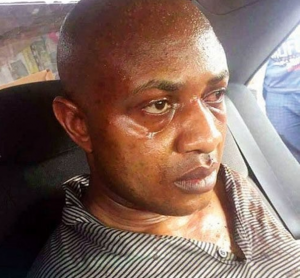 The court has adjourned the N300 million fundamental Human rights enforcement suit filed against the Inspector-General of Police, Ibrahim Idris and the Lagos state commissioner for police Fatai Owoseni, by suspected notorious kidnapper, Chukwudumeme Onwuamadike a.k.a. Evans to July 27th.

The presiding judge, Justice Chuka Obiozor, declined entertaining the case today on the grounds that counsel to the notorious kidnapper, Olukoya Ogungbeje, was yet to pay the punitive cost of N20,000 awarded against him at the last court hearing.

Ogungbeje was fined for professional misconduct as he failed to show up for hearing of the suit last week and instead sent a litigation officer from his law firm, Stephen Abunike, who told the court that his principal was indisposed and had written a letter seeking an adjournment.

At the resumed hearing of the case today, counsel for the Lagos State Commissioner of Police, Effiong Asuquo, informed the court that Ogungbeje had given him a post-dated cheque for N20,000 but he rejected it, saying that was not the order of court.

Justice Obiozor agreed with the counsel to the police commissioner and directed Ogungbeje to comply with the court order on the cost awarded against him. He subsequently, adjourned the case till July 27th.

Evans who was arrested on June 10th, is challenging his continued detention by the police. He is asking that he be charged to court or be released immediately.