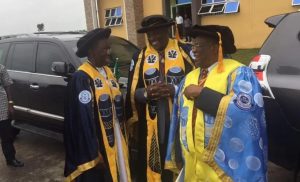 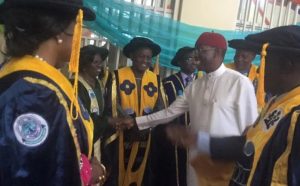 Governor of Delta State, Ifeanyi Okowa gave the best graduating student in Delta State University identified as  Joshua, has been given an automatic employment at the 11th convocation, the student graduated with a Cumulative Grade Point Average (CGPA) of 4.85.
Joshua graduated top of his university from the department of mass communication and was awarded by the governor himself during the 11th convocation ceremony in Delta State University, Abraka.
Mr Erubami was given the title of Graduate Assistant At Delta State University where he commendably topped his department and the entire school with his overall CGPA and emerged as the best graduating student.
Gov Okowa was present at the convocation ceremony to award the well-deserved honour to Joshua and as well as address other students who had equally done very well at the university from over three years of study.
The governor was immediately given an honourary gown as he entered the campus for the big ceremony. In his honourary gown, he addressed parents, lecturers, students and guests.
As a graduate, Joshua didn’t spend a second searching for job as he was given automatic employment by the governor for achieving a laudable feat.
Source: ( Naij.com )