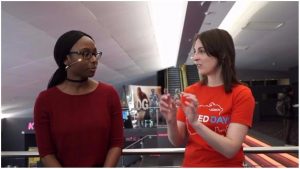 The World is beginning to evolve into a place where women can’t be pushed to the back burner in things that do matter, that was the story of  Ire Aderinokun a Nigerian Google developer expert who specializes in website designing. She is a self-taught user interface designer and front-end developer.
She is one of the only three Google developer experts in Nigeria and the only woman. Aderinokun also owns a blog called the bitsofcode.
The bitsofcode was created to break down coding techniques to new developers, on the blog she shares her thoughts on coding, experience about coding and tips on how to code.
At 13 years of age, Aderinokun built her first website as part of an online game obsession, even then she knew she loved designing websites but she was talked out of it by her parents and decided to further her career in other directions.
Aderinokun could be described as a jack of all trades with her experience in education. She gained a bachelor’s degree in Experimental Psychology and a Masters in Law at the University of Bristol in the UK. In 2014, during her masters, she decided to go after her childhood dream of developing a website and joined Codecademy, an online platform for tutoring intending developers.
After gaining her masters and completing her education at Codecademy, she did some freelance jobs building websites and started her blog bitsofcode in 2016. In 2015, Aderinokun became the Head of Technology at Big Cabal a media company in Lagos that creates content for Africans around the world.
She became one of Google’s technology experts in Nigeria after she joined the experts program this year. According to her, she went through a series of interviews before she was selected as a part of the three Google developer experts in Nigeria.
Meanwhile, Aderinokun is not only trying to acquire knowledge for herself but also trying to give back to the society, in June she announced that she would sponsor five Nigerian women who are willing to learn how to code.
Ireoluwa Aderinokun is the daughter of the late Chief Executive Officer of Guaranty Trust Bank, Olutayo Aderinokun.