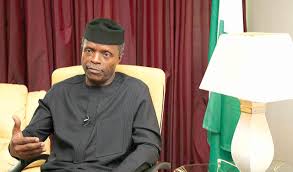 Two ministers-designate, identified as Stephen Ocheni (Kogi) and Suleiman Hassan (Gombe) would be inaugurated as Federal Executive Council (FEC) members on Wednesday, according to the office of the Presidency.

This was announced by the  Presidential spokesman, Mr Laolu Akande, announced this in his tweeter handle late Tuesday night, and said that Acting President Yemi Osinbajo would perform the ceremony.

Akande said that the inauguration of the ministers would precede the FEC meeting at the council’s chamber of the Presidential Villa.

“Ag. President Osinbajo would be swearing in the two new ministers already confirmed by the Senate tomorrow morning at the start of the Federal Executive Council meeting,’’ he said.

Ocheni and Hassan were confirmed by the Senate in May.

Ocheni replaces the late Minister of State for Labour, Mr James Ocholi, who died in a ghastly auto-crash along Kaduna-Abuja highway in 2016, while Hassan takes the place of Amina Mohammed.

Mohammed resigned as Minister of Environment to take up the job of Deputy Secretary-General of the United Nations.