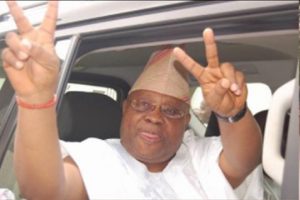 The Newly-elected in the just conclded elections over the weekend,  senator for Osun-West Senatorial District, Ademola Adeleke (PDP-Osun), on Wednesday took oath office to replace the late Isiaka Adeleke who died on April 23.

The oath was administered on him by the Clerk of the Senate, Mr Nelson Ayewoh, during plenary.

The new senator is a younger brother to the deceased Isiaka Adeleke.

“The development is an indication that Nigeria is going to move forward. I congratulate you. There is no winner, no vanquish.

“All our sons who are in Diaspora should come home so that we can re-position this party for a better Nigeria. This can only be possible if we are serious to change `the change’.”

In his reaction, Senate Leader, Ahmed Lawan, said that “Nigerians overwhelmingly and massively took out the PDP from the running of this country and it will remain in Diaspora.

“All the same, we congratulate Nigerians for the kind of judgment that the Supreme Court gave under this administration.

“During PDP’s administration, most of the court judgements were written at the villa.

“This goes to show that this administration believes in Separation of Powers and believes that our judiciary should remain and continue to be free in what it does,” Lawan said.

In his remarks, the President of the Senate, Dr Bukola Saraki, said that in line with Senate rules, there could not be further debate, adding that “we take note of Sen. Bwacha’s comments.”

With the inauguration of Adeleke, PDP now has 43 lawmakers while the APC has 65 lawmakers.