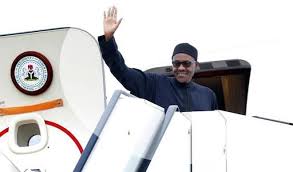 The National Chairman of the All Progressives Congress, Chief John Odigie-Oyegun, has told Nigerians that only doctors of President Muhammadu Buhari in the United Kingdom can decide when he will be fit to return to the country and return to work.

Addressing journalists after a closed door meeting of the National Working Committee of the party, including governors elected on the party’s platform, which held in Abuja late on Thursday, Odigie-Oyegun explained that the President was fast recovering from his ailment.

“We are glad to inform you that President Muhammadu Buhari is recovering in a very robust manner. We hope he takes it easy and when he comes back, I have no doubt at all that we will have a new and active period of activities.”

Meanwhile, Saturday PUNCH gathered that one of the highlights of the meeting was to ensure that the forthcoming Anambra State governorship election holds, against the threat by the Indigenous People of Biafra that the election would not hold.

A source privy to the meeting said, “It is a simple case of whether or not we have a government in place. We just cannot afford to allow an individual hold the rest of this great country to ransom.

“We agreed that as a party, we will do all within the limit of our powers to support the Federal Government to work with the states in the zone to ensure that elections hold as scheduled.”

Apart from reviewing the crisis rocking some state chapters of the party, it was also agreed that preparations for the various state congresses for the selection of delegates for the inaugural bi-annual national convention should commence.

However, on the issue of the national convention, most members expressed the view that pre-convention activities can commence with the hope that President Muhammadu Buhari will return before it holds.

Odigie-Oyegun told journalists that the meeting also “x-rayed” the current situation in Nigeria especially the ongoing agitations for restructuring and inciting statements emanating from individuals and groups across the country.

He said the party maintained its earlier position on the restructuring of the country as clearly stated in its manifesto, adding that the party’s leadership would do all it could at all times to ensure that Nigeria’s unity was preserved.

The APC chairman added, “Such inciting statements are not good for the nation`s health and have to be stopped.”

He maintained that the leadership of the party was prepared to listen to whatever grievances any group in the country might have while working assiduously to fulfill its electoral promises to Nigerians.