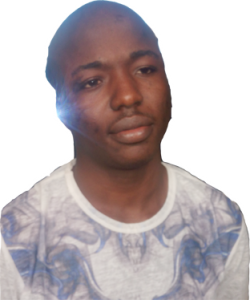 A graduate of Kwara Polytechnic, identified as Saidi Ayemojuba, who was recently arrested during a foiled robbery operation at a Lotto company in Ajagbadi area of Lagos, said he got into crime so he could provide for his family as he awaits the birth of his baby. Saidi who was paraded before newsmen yesterday, burst into tears after he was informed that the baby he said he went into crime for has been born.

An ex-convict, Saidi was part of an armed robbery syndicate that specializes in stealing from people that leave for their various places of work in the morning. He was arrested, charged to court and afterwards sent to jail. After his discharge, Saidi who is known as Aleeba by his gang members, said he took to robery again because he couldn’t get another job. Speaking to newsmen during his parade, Saidi said

“I decided to quit robbery when I came back from prison. But I could not find any good job even with my certificate. One day, I got a call from an inmate I met while in prison. He told me there was a job he would like me to execute. I met with other members of the gang . One of the members was a worker at a Lotto company at Ajangbadi, who told us that they usually left money .

We stormed the place at about 1pm . I stood at a vantage position , where I was given a bag containing the money. But one of the ladies in the company ran out and raised the alarm which led to my arrest. Others managed to escaped.

I was beaten until I passed out , only to find myself at the police station. One regret I have is not to have welcomed my new baby to the world. I don’t know what they would tell her. I thought of using the lotto money to prepare for her arrival, after which I intended to quit robbery finally. I am naturally not a bad boy because anytime I came back from operation, a gush of guilt will overwhelm me. I went into this out of frustration. No job , even after having my HND”

The Lagos state police commissioner, Fatai Oowoseni, who paraded him before newsmen, said he would soon be charged to court.