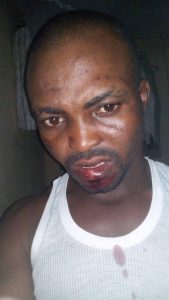 Armed Robbers invaded the Nigerian Christian Corpers Fellowship ( NCCF ) lodge at Ngwoaku Isuochi, Abia state and carted away cash, phones, laptops and other cadgets. According to one of the victims, Bassey Edem, the incident occurred yesterday at exactly 11.35pm, when the robbers attacked the corps members.

They didn’t stop there, they inflicted serious injury on them. He stated that if not for God, they would have killed the corps members. He then called on the Abia state government and NYSC to do something about their security, because they are no longer safe.