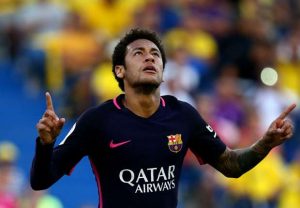 Barcelona manager, Ernesto Valverde has confirmed that  Neymar will not leave Barcelona after the Brazilian has been linked to PSG.

BBC Sports reports that Neymar did not speak to reporters after the pre-season win in New Jersey, but Valverde did address the speculation.

“We want Neymar with us,” he said.

“We know his value on the pitch and what he brings to the locker room.”

Neymar, who joined from Santos in 2013 and signed a new five-year contract until 2021 in October, only played for the first half of the International Champions Cup contest.

He opened the scoring after 15 minutes following a clever exchange with Paco Alcacer and doubled the lead nine minutes later, drilling low past Gianluigi Buffon after burrowing through the Juve defence.

Giorgio Chiellini scored a consolation for the beaten Champions League finalists just after the hour in front of a sell-out 82,104 crowd at the MetLife Stadium.