A young lady identified as Princess Jemaimah Kalu has revealed how she was saved after falling into the hands of ritualists during her stay in Lagos law school years back. 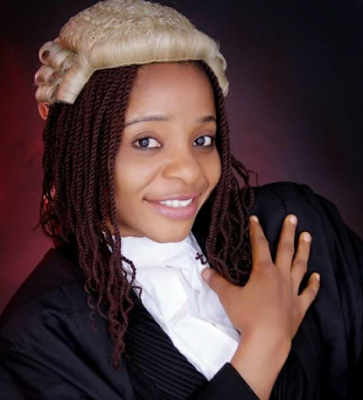 Below is how she chronicled her story:

I was in Law School Lagos at the time and was undergoing my Court Attachment at the Federal High Court in 2014. After the Court sitting for the day, I strolled down to Falomo bridge and entered a taxi heading to CMS. At CMS I was supposed to board another vehicle that will take me to Ajegule, I had an outreach to carry out in a secondary school there.However, I noticed the taxi I entered from Falomo was not following the correct road that leads to CMS. I was about complaining when they driver and the three other men in the vehicle started having a conversation in Hausa language. They did not know I have a little understanding of the language. After listening to their conversation, it dawned on me that I was inside the vehicle of ritualists “One Chance”. Then I started praying in tongues within me.

They driver kept on driving and asking the others if I have become unconscious. Well, my eyes were wide open! I remained calm and every time he turned around to look at me, I smiled . At a point he became very angry and drove into a remote place. I was seating in between two men. The doors were firmly locked and the windows were closed. People were passing by but nobody dared come close to see what was happening. The men were looking at me and I was looking at them. After sometime, their Native Doctor arrived and entered the car through the front door. He brought out some powder like stuff from his pocket, sprayed some on his palm and after chanting some words he blew it on my face.

However, I noticed that while he was blowing the stuff, he couldn’t look at my face. When he was done I smiled at them and continued praying within. Nothing happened! The Native Doctor got angry and asked the driver where he picked me from. He said to him,

“Where you carry this one come from? Abi you no see the fire wee dey for her face when you carry her? The GOD wee she dey serve done keep trailer for road wee go kill you if you touch her oh! Open door make she carry her trouble dey go oh!”

Immediately after saying this, the driver who was already scared opened the door and yelled at me to get out of his vehicle. Well, I refused to get down. I insisted that they must show me how to get to Ajegule and I told them my mission was to go there and preach the gospel and at that point I did not even know the location where I was. The driver was trying to yell more at me when the Native Doctor told me to come out and he walked me down to the park. When we got to the park before he left he said to me,

“My pikin, that GOD wee you dey serve, make you no leave am oh!”

When I entered the vehicle heading to Ajegule, I kept on weeping. My body was cold and stiff. My lips were shaking! I kept on thanking JEHOVAH!

That day, the LORD delivered me from death! HE wore me the garment of boldness. I was like a lion in the midst of the wicked! The Native Doctor that was supposed to end my life became my escort!

Indeed, we worship a living GOD! Praise the LORD, hallelujah!