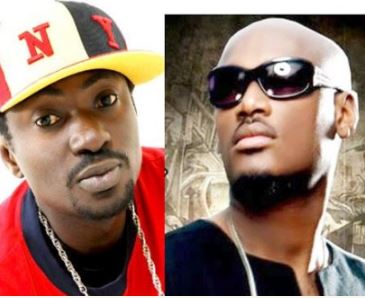 Blackface has no hands down over his fight with 2face over song theft has he still insists that 2Baba must be the one to apologize. Obviously, not satisfied with accusing the African Queen singer , Black face once again made his grouse known in a recent interview with HipTV.

The Singer who has continually faulted 2face for not acknowledging nor rewarding him for his role in writing African Queen, has said that he is not willing to let go of the accusations.

Speaking on Faze’s move to broker peace between himself and 2face, he said:

“Faze is my friend and he is going to do his own bit. But, one thing that he does not know is that who feels it, knows it. He didn’t write the song, I did. So he does not know what I am talking about.It is easy for him to call for peace. But then, it is the duty of the offender to apologise for his action. I can’t keep quiet about what happened because I haven’t offended anybody. I have not stolen anybody’s song.”

He also stated that the Federal Government is yet to institute an appropriate punishment for individuals who are involved in song theft.

“Had the Federal Government introduced an appropriate punishment for stealing other people’s songs, many music artistes would be in trouble today. If the penalty required offenders to spend some years in jail, many so-called big artistes would be in prison by now.
“Some of them steal songs from fellow musicians based in the country or abroad and pass them off as their own. This is very bad for culture and the creative sector. It is also bad enough for the honest and hardworking Nigerian artiste who goes through a lot of trouble to survive.“Whatever the government decides, the courts are there to ensure that justice prevails. If you find yourself on the wrong side of the law, you will have to accept the consequence of your actions.”