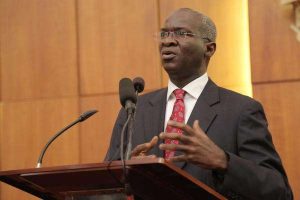 The panel of the House of Representatives to investigate the altercation between the Minister of Power, Works, and Housing, Mr. Babatunde Fashola (SAN) and the National Assembly will meet with Fashola on Friday.

The minister, senators and members of the House of Representives had clashed soon after Acting President Yemi Osinbajo signed the 2017 Appropriation Bill of N7.441tn into law on June 12 over cuts in the budgets of the Lagos-Ibadan Expressway and the second Niger Bridge.

Findings showed on Monday that the ad hoc committee, which is chaired by an All Progressives Congress lawmaker from Kano State, Mr. Ali Madaki, had fixed Friday as the meeting date with Fashola.

In a response to an electronic enquiry by The PUNCH in Abuja, Madaki simply wrote, “Friday, 10am.”

Incidentally, the meeting will be held the second day after the House would have probably passed a virement proposal of N135.6bn by Osinbajo on Wednesday (tomorrow).

In the virement, N46bn is set aside for Fashola’s ministry to fill in the budget gaps in key projects that set off the row between him and lawmakers.

Fahola had criticised the decision of the National Assembly to slash the budget of the Lagos-Ibadan Expressway from N31bn to N10bn and that of the second Niger Bridge from N15bn to N10bn.

He bitterly complained that the action of the lawmakers had put the hope of early completion of the vital projects in jeopardy, accusing members of stuffing the budget with boreholes and health centre projects.

The minister had summed up by saying that the legislators had “stark, worrisome knowledge” of the budget of his ministry.

His choice of words infuriated lawmakers, who accused him of inciting Nigerians against the National Assembly after Fashola participated in all the meetings leading to the signing of the budget.

The House in particular, through its spokesman, Mr. Abdulrazak Namdas, dismissed Fashola as telling Nigerians “half truths.”

The House alleged that the minister’s real reason for attacking the legislature was because the National Assembly removed a provision of N20bn he made for “contingencies” in the budget.

They later summoned the minister to appear before a committee to explain why he went to the public to speak on a matter already settled by both parties before Osinbajo signed the budget.

Meanwhile, on Wednesday (tomorrow), the House will begin the consideration of Osinbajo’s virement proposal.

The Deputy Speaker of the House, Mr. Yussuff Lasun, confirmed this in Abuja on Monday.

“We are looking at the constitution review report and the virement request by the Acting President on Wednesday and Thursday,” Lasun stated.

The letter on virement was titled, “Request for Virement of Funds from Various Budget Lines to Fund Federal Government’s Priority Projects and Programmes.”

The opening paragraph of the letter confirmed the budget cuts and the fact that the two sides agreed to resolve their differences through the virement.