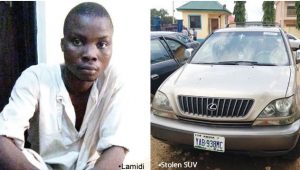 Lamidi, from Oyo town in Oyo State, was apprehended last week by the investigators at his home town where he was hiding after selling Nwachukwu’s Lexus SUV with Abuja registration number, YAB 938 MC.

The police, subsequently, recovered the vehicle which was sold with forged documents to one Femi Adeyemi.

Northern City News learnt that the deceased, 75, had chartered the suspect’s cab on November 23, 2016 and in the course of taking him around informed him about his car which had a mechanical fault.

Lamidi was said to have offered to take the ex-envoy to his brother, a mechanic, who could work on the car and it was decided that Lamidi would come to the ex-ambassador’s house the following day.

The driver reportedly showed up at the ex-envoy’s residence at Villa Nova Estate, Apo the following day as agreed.

It was gathered that the deceased lived alone, and his security guard, who doubled as an electrician, was also not in the house during Lamidi’s visit.

Investigators stated that Nwachukwu offered the driver some food but he declined while sitting across from him at the dining table.

“As the man was eating, the suspect pounced on him and wrestled him to the floor and then stabbed him in the neck with a pair of scissors. He stole the plasma television and home theatre in the apartment and went away with the deceased’s Lexus SUV which he sold for N1.480m to one Femi Adeyemi with forged documents,” an investigator said.

Lamidi told our correspondent on Thursday at the Apo Divisional Police Station that he did not know what came over him, adding that he just found himself stabbing the septuagenarian until he died.

“After stabbing the man, I felt terrible and guilty but there was nothing I could do to reverse the situation,” he said.

After killing Nwachukwu, the suspect explained that he sold the TV and home theatre audio system to a seller of fairly-used products at Area 10, Abuja for N38,000.

He said that he kept the SUV in Sauka Village along Nnamdi Azikiwe International Airport Road for two weeks before driving it to Oyo town.

When asked if he had committed similar crimes before, the suspect denied, saying it was his first time.

“I have not committed any crime before; I blame the devil for this. Sometimes, I entertain negative or diabolical thoughts, but I don’t smoke or drink,” he added.