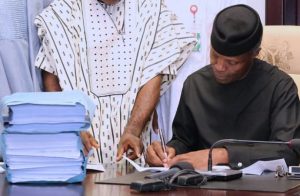 There might be a cabinet Reshuffling among the ministers as the Presidency is trying to accommodate the two ministers that were inaugurated on Wednesday.

The Acting President, Yemi Osinbajo, had on Wednesday inaugurated Stephen Ocheni (Kogi) and Suleiman Hassan (Gombe) as ministers over two months after their nominations were confirmed by the Senate.

The inauguration took place inside the Council Chambers of the National Assembly at the commencement of the weekly meeting of the Federal Executive Council.

Shortly after administering their oaths of office on them, Osinbajo announced that their portfolios would be announced “shortly.”

He has since not assigned portfolios to the two ministers.

The tradition is that ministers are assigned portfolios immediately after taking their oaths of office.

When our correspondent sought to know when the ministers will be given portfolios on Saturday, a Presidency official, who spoke on the condition of anonymity, said it would be done once the government was ready.

Although he was not specific on when government would be ready, the source indicated that it would be done soon.

He also gave an indication that in taking the decision, the government would not restrict itself to two portfolios.

“Allocation of portfolios to the new ministers will be done when the Federal Government is ready, which is soon.

“That (allocation of portfolios) will be done perhaps broadly beyond two portfolios,” he said.

It will be recalled that the House of Representatives had on July 11 handed down a seven-day ultimatum to Osinbajo to inaugurate the ministers whose names were forwarded to the Senate by President Muhammadu Buhari.

Osinbajo had failed to inaugurate the ministers since Buhari left the country for London, United Kingdom, where he is currently receiving medical attention.

The slots of Kogi and Gombe states in the federal cabinet had been vacant following the death of the Minister of State for Labour, Mr. James Ocholi (SAN), in an accident on March 6, 2016; and the appointment of former Minister of the Environment, Amina Mohammed, as the Deputy Secretary-General of the United Nations.

In inaugurating the ministers on Wednesday, Osinbajo described the Federal Executive Council as one that is committed to the reform programmes of the Federal Government as contained in the Economic Recovery and Growth Plan.

Osinbajo had said, “We have focused our attention on key areas of that economic recovery plan and we believe those key areas are things that need to be done to make a difference in the Nigerian economy and in the lives of Nigerians.

“Time and time again we have continued to emphasise the need for ministers to pay particular attention to all the areas that we have highlighted in the economic plan.”