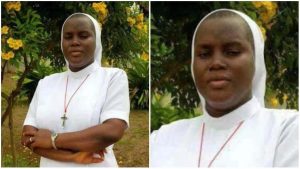 A Catholic Nun identified as sister Blessing Olowojoba has allegedly been kidnapped in Kogi state by suspected kidnappers. According to a Nun from the Eucharistic Heart of Jesus (EHJ), the sister was kidnapped in Okene, on Friday, July 7.
The sister who was identified as Biola Victoria, urged people to pray for the safe return of the victim from the clutches of the kidnappers. She expressed that an attack on a member of EHJ is an attack on the church itself.
Victoria asked members to keep praying for the servant of God to return unharmed. She wrote: “Please bombard the heavens with your cries and thanks. Remember we recently did it to God’s ultimate glory. We can do it again for our Beloved Religious.
Please carry this prayer petition with you as you sleep tonight and as you go to Mass on Sunday and until we secure Sr. Blessing’s freedom from the captivity which is not hers. Any evil attack on one of us, especially on our ordained servants of God, is an attack on the Church.”
Source:( Gossip.naij.com)
Share
Facebook
Twitter
WhatsApp
Previous articleEtisalat pulls out of Nigeria, gives 3-week ultimatum for a name change
Next articleMan Dies on His Own Birthday After Drinking Entire Bottle of Whiskey
- Advertisement -