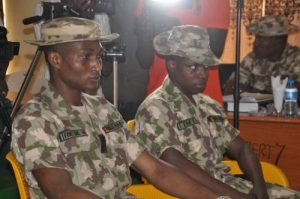 The President of the Court, Lieutenant Colonel Adamu J. Hassan said the court having listened to the allegations and presentations of both the prosecuting and defence counsel, decided to punish the soldiers for acting against national security in the fight against Boko Haram.

He sentenced Private Eric Nwokoye and Private Macauley Fortune to 23 years imprisonment for the five-count charge of unlawful possession of firearms and 5 empty magazines of AK 47 rifle.

Other charges filed against the soldiers include unlawful possession of 50 rounds of 7.62 mm NATO ammunition, 2 rounds of BMG ammunition and criminal conspiracy to steal the above items.

The soldiers were arrested at Jambutu motor park in Jimeta-Yola town, Adamawa state.

In the second case, Lt. Col. Adamu Hassan sentenced Corporal Garba Saidu to 10 years imprisonment on 2-count charge of unlawful possession of a box of 1,400 rounds of 7.62mm ammunition buried at Response Squad 7 Division barracks and possession of 1,400 rounds of 7.62mm ammunition hidden near a poultry farm at the Trailer Park Anti Bomb Squad Unit..

The Prosecuting Counsel, Lt. Col. Nkenmah Andrew Nyaro asked the court to treat the two offenders in the first case as first offenders and the convict in the second case as a first convict based on their personal records.

The Defence Counsel, Barrister Adamu Sani Badagubi pleaded that the two young soldiers had aged mothers and were remorseful and as such should be treated as first offenders and fined instead of sending them to jail.

Moreover, the defence Counsel added that the third convict participated in the Niger Delta and Jos Task Force operations without being found wanting before he was deployed to Operation Lafiya Dole in 2014 where he participated in Bama, Konduga and other operations where he recovered ammunition and N4.6 million and handed it over to the military authorities.

He said apart from that, the convict is married with children and has an aged mother. 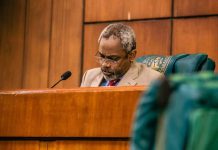