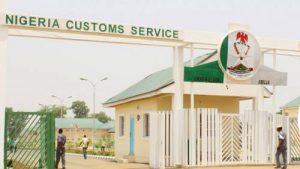 The Federal Operations Unit (FOU) Zone “A” of the Nigeria Customs Service (NCS) in Ikeja has  said it intercepted contraband worth N209 million in the last one month.

Comptroller Mohammed Uba-Garba, the Controller of the unit, disclosed this at a news conference in Lagos on Wednesday.

He said the seizures had total duty paid value (DPV) of N229.9 million.

Uba-Garba said the unit also recovered N28.9 million from duty payments and demand notices on general goods that tried to outsmart its personnel at seaports, airport and border stations.

Uba-Garba said 15 suspects were arrested in connection with the seizures which took place between June 13 and July 10.

He said that the briefing was In fulfillment of “my promise during the last press briefing held on June 14 2017 when I did say that at least every month we will showcase some of our achievements in the fight against smuggling.”

“I am happy to tell you that after series of meetings with my field officers and reviewing our operational strategies to meet up with the current trend of smuggling, we have intercepted various contraband.

“In the same vein, the unit, through our interventions, recovered N28.9 million from duty payments and demand notices on general goods that tried to outsmart our officers at seaports, airport and border stations through wrong classification, transfer of value and short-change in duty payment.

“Fifteen suspects have been arrested in connection with these seizures.

“You will agree with me that the fight against smuggling can only be won if all hands are on deck; the commitment of the officers in foiling the antics of smugglers who use different methods of concealment cannot be over emphasized.

“Only God knows what would have happened if these drugs got to the wrong hands,’’ Uba-Garba said.

The News Agency of Nigeria (NAN) reports that the drugs were handed over to the National Food and Drugs Administration and Control (NAFDAC) for further investigation.

The offences contravened Section 46 (d), (e) and (f) of CEMA Cap of 2004 of which the penalty is outright seizure.