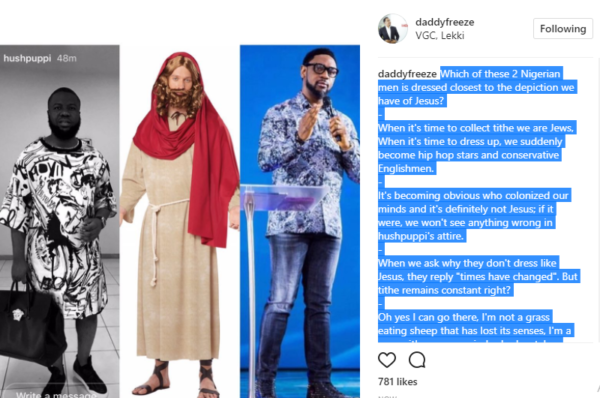 Cool FM OAP, Daddy Freeze, has taken to Instagram to share a collage of Hushpuppi’s viral photo in female wear, Jesus and the General Overseer of COZA Pastor Fatoyinbo who he has always had a face-off with.

Daddy Freeze who asked which of the two Nigerian men dressed closest to the depiction we have of Jesus, went further to disclose that he’s not a grass eating sheep that has lost its senses. He also claimed he’s a man with an open mind, who has taken time out to study the Bible.

“Which of these 2 Nigerian men is dressed closest to the depiction we have of Jesus?

It’s becoming obvious who colonized our minds and it’s definitely not Jesus; if it were, we won’t see anything wrong in hushpuppi’s attire.

When we ask why they don’t dress like Jesus, they reply “times have changed”. But tithe remains constant right?

Oh yes I can go there, I’m not a grass eating sheep that has lost its senses, I’m a man with an open mind, who has taken time out to study the Bible, the antiquities of the Jews and many ancient texts, so as to broaden my perspective and make me immune to bullshit.

Many of our ‘spiritual’ fathers, have become complacent in their teachings, and our minds have failed to evolve above their mediocrity.

The time to free ourselves from this mental bondage is now, failure to do so, is dancing with great peril. ~FRZ

Matthew 23:5
[5] Everything they do is done for people to see: they make broad their phylacteries, and enlarge the borders of their garments, [6] they love the place of honor at banquets and the most important seats in the synagogues; [7] they love to be greeted with respect in the marketplaces and to be called ‘Rabbi’ by others.