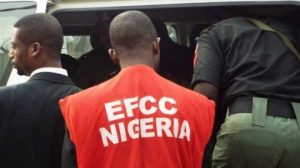 The Economic and Financial Crimes Commission has debunked the rumour making the rounds the social media,  that it has  recovered $42m from the farm of the Caretaker Committee Chairman of the Peoples Democratic Party, Ahmed Makarfi.

The EFCC said this in a statement by its Spokesman, Mr. Wilson Uwujaren, on Friday.

According to social media reports, the EFCC had recovered the $42m from Makarfi two hours after he was declared the authentic chairman of the party’s caretaker committee by the Supreme Court on Wednesday.

The report read in part, “$42m was found in Senator Makarfi’s farm by the EFCC less than two hours after the Supreme Court judgment.”

However, the EFCC urged members of the public to ignore the message, adding that there was no truth in it.

“While many unsuspecting Nigerians shared the unfounded post, others simply copied and reposted as the original, which generated a myriad of reactions, suggesting that the commission was a tool in the hands of the executive to further destabilise the PDP.

“We have considered it necessary to set the records straight and to advise social media activists to be wary of those who are out to sow a seed of discord among Nigerians as there is no EFCC investigation on Senator Makarfi.”