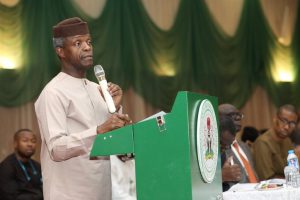 The Federal Government is set to announce a new policy on community policing to help put an end to  kidnapping, robbery and other violent crimes across the country.

Acting President Yemi Osinbajo, who announced this on Tuesday in Abuja, explained that the policy would involve retired Inspectors-General of Police whose experience and expertise would be exploited to address the security challenges in the country.

Speaking during the launching of a book, ‘Law on prevention and detection of crimes by the police in Nigeria,’ written by a retired IG, Dr. Solomon Arase, Osinbajo stated that the current security system was not efficient enough to address the security challenges facing the nation.

The acting President, who was represented by his Special Adviser on Political Matters, Senator Babafemi Ojudu, stated that it was impractical for the IG to be in Abuja while controlling crimes in the remote parts of the country.

He said, “There is no way we can continue running the police as constituted. Very soon, we would come out with a policy on community policing. For our brothers who have retired as IGs, they would have roles to play very soon.

“For us to continue this old way of policing our country, I don’t think it can work and it is not working. We have to look at other parts of the world, how they are doing it.

“Sitting down in Abuja, an IG policing every part of the country and being in charge of the welfare of all policemen, there are concerns and challenges, but the challenges are supposed to be addressed.”

He noted that the fear about decentralisation of the police was unnecessary and could be addressed, adding that the same concern was expressed before the granting of private television and radio licences.

He encouraged the elite to allow their children to join the force to improve the quality of the personnel.

A former Cross Rivers State governor, Donald Duke, called for state police and recruitment of more policemen, arguing that the decentralisation of the police was the greatest deterrent to crime.

“We must quickly attain at least 500,000 federal police from the current 350,000 or thereabouts and about the same number at the state level. The decentralisation of policing and presence is the greatest deterrent to crime and allows for better monitoring and intelligence gathering,” he said.