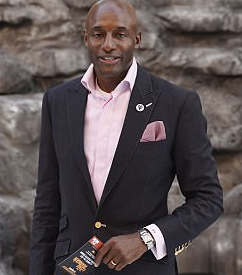 54-year-old footballer/Businessman, John Fashanu, was reportedly arrested by the police in Abuja for being involved in a N9,550,000 land scam. According to Mirror, Fashanu was arrested at his Sun City Estate home in Abuja on July 17th after a friend who gave him the money to help him buy a landed property in Abuja, reported to the police that the ex-footballer had conspired with two other persons to dupe him.

A Deputy Inspector General of Police, Hyacinth Dagala, who spoke with Mirror, said: ‘John Fashanu was arrested on July 17 in connection with an allegation of criminal conspiracy and obtaining the sum of N9,550,000 under false pretense. He was granted administrative bail on July 18 but because of his inability to produce the requisite surety on that day, he remained in detention until July 19 when he was released.’

A friend of Mr Fashanu, Barrister Hype Egbune, said that it was a business deal ‘between friends which went south’ and police were asked to ‘mediate’.

Fashanu has reportedly agreed to pay the money but still denies any wrong doing. Meanwhile, the police are on the look out for the two men who allegedly connived with Fashanu to dupe the victim. Fashanu is yet to react to the report.