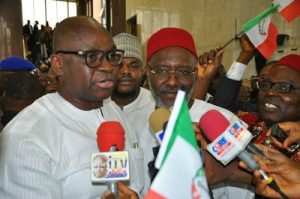 Governor of Ekiti State, Ayodele Fayose has said he does not believe that the President is strong and recuperating well as said by acting President, Osinbajo.
Fayose who spoke to journalists in Abuja promised to release 11 recent pictures of the president to justify his stand on Buhari’s state of health. In his words.
‘I’m not going to prove that (the President is recuperating) to Nigerians. It is him (Osinbajo) who said he saw the President that needs to prove to Nigerians. I have made the allegations and I have said it expressly that we are in the age of technology. How do we have an Acting President of a nation that has visited his boss that cannot show evidence of the meeting? The picture they are posting on social media are pictures taken long time’.
He continues to say,’you recall that I said this again at Transcorp Hilton in 2015. We are talking about President of 170million people. The Acting President visiting the President that has left this country for about 60 days or more cannot show evidence of the meeting. It shows the President is in critical condition,”

Fayose threatened to go public with pictures of President, if the situation is not properly handled, ‘again, if they are not careful, I will release some pictures. This will in turn create so many serious problems for this country. And I’m telling you again that I don’t need to prove anything to Nigerians because they are saying the President is well. He’s hale and hearty. He has refused to come home in about 70 days.

The office of the President and office of the government are offices that encourage the office holders to perform. A President that has spent so much time outside the country in a year shows clearly that this sickness is major. If they go further and try to continue to deceive Nigerians, I will release about 11 damaging pictures anytime from now on the President’s health,” he said.