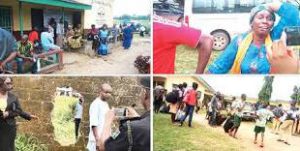 The abductors of six pupils  of the Lagos State Model College, Igbonla, Epe, have finally contacted some parents of the students again, promising they will see their children soon.

It was learnt on Wednesday that the kidnappers also allowed the parents to speak with all the children, promising that they would be released soon.

It was gathered that the kidnappers did not request that the parents or the government pay any additional ransom.

The children had spent 41 days in captivity as of Wednesday.

Three days after notifying the college of the attack, the gunmen broke into the boys’ hostel around 6am on Thursday, May 25.

They picked 10 Senior Secondary School pupils from the hostel and led them to a waterside, where their speedboat was anchored.

The pupils were screened based on their family backgrounds. While four were consequently released, the assailants whisked away the remaining six pupils, identified as Peter Jonah, Isiaq Rahmon, Adebayo George, Judah Agbausi, Pelumi Phillips and Farouq Yusuf.

After a prolonged negotiation, the kidnappers eventually settled for N100m ransom for all the children.

The parents had protested at the Governor Akinwunmi Ambode’s office on Wednesday, June 7, accusing the government of indifference and asking it to facilitate the release of the children.

Eventually, the parents raised and paid N10m to the captors on June 9.

The following day, they demanded additional N40m ransom and went incommunicado, leaving the parents in confusion.

However, some parents, who spoke with our correspondent on Wednesday on condition of anonymity, said the kidnappers had established contact with them again.

They said the gang allowed them to speak with all the children and assured them of their safety.

A parent said, “They have called again and promised to release our children soon. But they did not specify when and where they will be released. They allowed one of us to speak with all the children and they assured the parent that the kids are safe.

“Our plea is that they should have mercy on us and free these children. We cannot wait to see them.”

Another parent, who also confirmed the phone call, said the kidnappers did not demand further ransom.

The parent said, “It is true they have contacted us and made a promise to free our children very soon. In fact, we have been on the lookout since yesterday (Tuesday). We just hope they will not renege on their promise again. They did not request more ransom. We pray that they do not change their minds.

“We are a bit relieved to hear from the children again after about three weeks’ break, but the most important thing is their freedom. We want to see our children.”

He said, “We are ensuring security awareness and presence in all schools in the state.

“The police are also working with other security agencies and all stakeholders to dialogue on the best way to police the state.

“Such efforts will lead to reduction in crimes and the rescue of the schoolchildren.

“The police are working round-the-clock to rescue them very soon.”

Meanwhile, the Muslim Students’ Society of Nigeria says the inability of security operatives to rescue the six kidnapped pupils undermined the investment of the state government on security.

The Amir (President) of the MSSN in Lagos State, Dr Saheed Ashafa, said this in a press statement on Wednesday.

He said allowing the children to spend 41 days (by Wednesday) in captivity showed that security in Lagos needed reforms.

He said, “The continuous stay of the pupils with kidnappers means that the investment of the state government in security has yielded little or no result. The situation is an embarrassment on the much rated Lagos State.”

Ashafa, who lamented the psychological torture that the pupils would be going through, prayed for their safe rescue, urging the parents of the victims to be hopeful.

Ashafa deplored the spate of criminality bedeviling the peace of the state in recent times.

“We appeal the state government not to relent in its effort to maintain a crime-free Lagos,” he added.

The federal government and southwest governors have reached an agreement to draw up a legal framework for the Western Security Network code-named: Amotekun. This was...
Read more