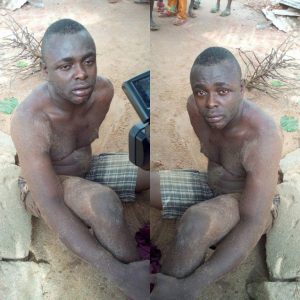 A graduate of History from Abia State University,identified as Uchechukwu Oriaku was allegedly caught on Friday in his house molesting a girl of 10 years.

According to the girl’s father, who is a furniture maker, Uchechukwu met him this morning at home and hinted him about a certain business he needed both of them to execute.

They scheduled to meet at 2pm at his workshop for further discussions. This was because he was visiting a building site in the morning. According to him, he was still at the site when he received a phone call from one of the boys in community that Uchechukwu had been caught molesting his daughter.

The girl while narrating the incident said Uchechukwu came to their house when her father had left and took her to his house with the notion that he bought her a new pair of slippers.

On getting to the house, he started touching her privates. Apparently, this he was doing, when a group of youths got feelers about the sordid event and caught him in the act. The culprit blamed the devil for the act.