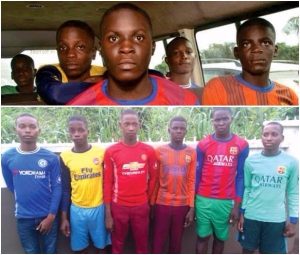 The six kidnapped students of the Lagos State Model College, Igbonla, Epe, were released on Friday through the combined efforts of the security agencies and Governors Akinwunmi Ambode of Lagos State, Rotimi Akeredolu of Ondo State and Ifeanyi Okowa of Delta State.
The abducted students revealed that they survived routine beatings, exposure to the elements, starvation, un-hygienic food and water in the kidnapper’s den.

In an interview with TheNation yesterday, one of the students (name withheld) told The Nation:

“We were blindfolded, kept under the bridge with our legs tied. They fed us eba and crayfish soup. We were also given ‘reddish water’ to slay our thirst.”
The maltreatment soon took a toll on them and two fell ill: they bled from the mouth.

The victim said their abductors routinely beat them and left them in the open, day and night. He added that the only shelter was a bridge but they had no blankets or additional dresses to shield them from the cold.

“They were beating us. They fed us with eba and crayfish soup. They mixed the crayfish with pepper and water and then gave us to eat with eba.
“They were giving us red water to drink. The water had a bad taste but no odour. It was polluted. They kept us under a bridge. They gave us no bed sheets or blankets.”
Their only wears all through were the clothes they had on when they were abducted and the replica jerseys provided by the kidnappers.

“They were the ones who gave us the replica jerseys,” he said.
The student is now “fine and happy” to be back home with his family after all the trauma.

“I have done my medical check up. I am fine and happy to be home with my family,” he said and paused, his mood changing immediately.
That ended the conversation at the discretion of his interviewer.

A second victim (name withheld) said they changed camps thrice during their captivity, enduring starvation at some point.

One of the camps was made of cut trees and the kidnappers had to erect a tent to shield them from rain.

As time went by the kidnappers allowed the boys to prepare their food, and move around, he said.

His mother commended Lagos Police Commissioner Fatai Owoseni and the Commander, Rapid Response Squad (RRS) for standing by them throughout their ordeal.

“Honestly, I do not want to expose my son to any danger. It is true he fell sick in the camp because we were told then,” she said.
“He was kidnapped while he was recuperating from an illness and so, I think the environment they were kept and the trauma made him sick again. He was examined on Friday night and the doctors asked that we return to the hospital. But he is okay now.