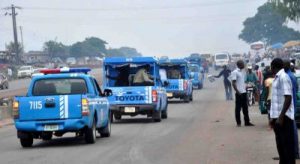 The act of honesty was been displayed by operatives of the Federal Road Safety Commission, FRSC, in Osun, on Wednesday,when  a huge amount of money recovered from an accident victim was returned to his relatives.

The Assistant Commander in charge of Ipetu-Jesha Unit, Bello Odebode, made this disclosure in an interview with the News Agency of Nigeria in Ipetu-Ijesa.

Ms. Odebode said that the sum of N354, 000, which was recovered from the victim had been returned to his relatives.

The FRSC official said that the commission was saddled with the responsibility to protect lives and property of the public, especially on highways.

“We are not just protecting lives on the highways but also public property, as one of our mandates,” she said.

According to her, the need to return recovered property from accident scenes, shows that the commission does not hold back whatsoever is recovered, even if the victims involved die.

Ms. Odebode charged other corps commanders of the commission to imitate this good virtue and also be a patriotic Nigerian in the course of discharging their duties.

She said that the sum of N354, 200 recovered by the commission’s patrol and rescue team, belonged to one Johnson Adeyemi, who had since been in a critical condition in the hospital.

“The money we are returning back to the relatives of the victim involved in an accident belongs to one Johnson Adeyemi.

“His friends and relatives, including his wife are here to take back what we recovered from the spot of the accident,” Ms. Odebode said.
The FRSC official advised motorists to always obey road traffic laws in order to avert unforeseen accidents, which might lead to loss of lives and property.

Earlier, the wife of the victim, Abimbola Adeyemi, had lauded the FRSC for the spirit of sincerity and truthfulness.

Mr. Adeyemi was involved in an auto crash on June 26 along Ilesa-Ipetu-Jesa road and he is still lying critically ill at the Wesley Guild Hospital, Ilesa.