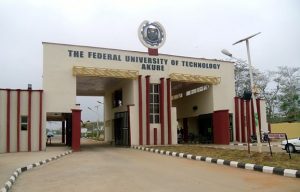 The family members of Late Alex Olokun, one of the students of the Federal University of Technology, Akure, who drowned in a lake on the campus, has debunked the claims by the university management that the students drowned while taking selfie on a canoe.

A relation of the deceased, Oluwatoyin Fakilede, in an interview with our correspondent in Osogbo, said that her brother drowned while trying to rescue his colleague, Emmanuel Olabiyi, after the canoe they were in capsized.

However, our correspondent gathered that it was the FUTA Student Union, that said in a statement issued after the incident that the two students drowned while taking selfie. The incident happened on July 1, 2017.

Fakilede claimed that the death of her brother was caused by the institution due to negligence, saying the university ought have provided life jackets and ensure that there were life guards on standby before asking students to use the canoe.

She said despite this, the university lied by claiming the deceased died while they were taking selfie. According to her, the students left their phones behind before they boarded the canoe for the trip said to be part of their entrepreneurship training.

Fakilede said, “The students agreed to go on the canoe in a group of four students per trip and there was no objection to this. Some had gone and it was the turn of Alex and other students. But, getting to a point in the river, the canoe capsized and they all fell into the water.

“Two among them struggled to swim out of the water immediately, leaving Alex and Emmanuel behind. Alex eventually found his way out of the deep region; when he looked back, he saw the last colleague raising his hand for help. Out of his kindness, Alex stretched  his hand to pull the boy out. Instead, the boy drew Alex back into the depth of the water where they both died.

“It’s quite unfortunate and unheard of that there was no single safety measure provided to safeguard the lives of people on the farm as the supervisor watched those boys struggle inside the water. During an interview with one of the supervisors, he said   that he was quite aware the students   were drowning but he couldn’t help because everybody present there was  scared of the depth of the water. So, they had to call for a rescue team outside the school.

“This report is contrary to a press release by the school authority which had already gone on the Internet that the students went to take selfie on the canoe. But they left their phones behind.”