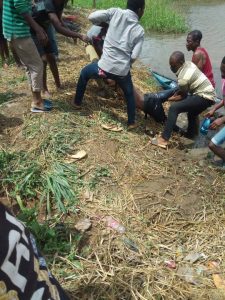 It was a sad day for the students of the Federal University of Technology, Akure, Ondo State, after two 300 level students drowned while undergoing their Entrepreneurship Training (ENT), today.

According to the school’s Student Union president and P.R.O, the incident occured at the laboratory for Fishery and Aquaculture, at the back of great hall, Obakekere.

After the training, four of them decided to take a selfie on the canoe packed at the venue, during that process, the canoe which the four of them where in, capsized, and they drowned.

However, two of them narrowly escaped because they were able to swim, while the other two were unable to make it.