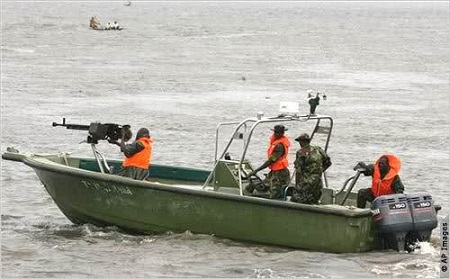 The Nigerian Navy has revealed that it successfully foiled an attempted hijack of a Merchant Vessel, MV UAL HOUSTON, around Bonny Fairway Buoy, Port Harcourt, Rivers State.
According to Premium Times, the Acting Director of Information, Naval Headquarters, Suleman Dahun, disclosed this in a statement issued on Friday in Abuja.
Mr. Dahun said that the incident occurred on July 13, at about 7.45 a.m.
He said six suspected sea robbers boarded the vessel but were unable to access the ship’ s living quarters, bridge or machinery room as the ship was on lockdown by the crew.
“Subsequently, on receipt of the ship’s distress call, the Forward Operating Base (FOB) Bonny dispatched a boat to rescue the vessel.
“On sighting the naval patrol boat, the robbers abandoned their hijack plot and fled,” Mr. Dahun said.
He said that preliminary investigation revealed that no crew member was abducted nor any item was stolen during the attack.
He noted that the Navy had sustained the recent trend of successes in the operations against crude oil theft, illegal bunkering and other illegal activities in the Niger Delta.
The acting director of Information, also said that NN ship (NNS) PATHFINDER had discovered and destroyed seven illegal refineries around Bolo Creek and Isaka axis in Rivers.
“The illegal refineries destroyed at Bolo Creek had several storage tanks, two wooden boats laden with about 80,000 litres of suspected stolen crude oil and 65,000 litres of illegally refined Automotive Gas Oil (AGO).
“The illegal refineries destroyed in Isaka axis had storage pits laden with 45,000 litres of suspected stolen crude oil and 5,000 litres of illegally refined AGO,” he said.
Similarly, Mr. Dahun said, a patrol team deployed by the Forward Operating Base, FOB, Bonny arrested a vessel, MT LEADERSHIP, around Onne axis for conducting illegal bunkering operations.
“The vessel was arrested while receiving unspecified amount of petroleum products suspected to be illegally refined AGO from a barge without valid naval approval.
“The vessel had 12 crewmen while 16 men were on the barge. The vessel and the barge are currently under the custody of the Base, while investigation is on-going,” he said.
According to Mr. Dahun, the Nigerian Navy has reiterated its commitments to continue to clamp down on illegal refineries and their operators, crude oil thieves and other criminal activities in the maritime domain.
This, he said, was all targeted at meeting operational objectives in line with the Chief of Naval Staff’s Strategic Directive.