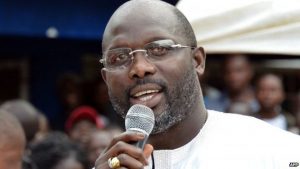 Former World Footballer of the year, George Weah along with nineteen other candidates will contest presidential elections in Liberia in October, as Ellen Johnson Sirleaf steps down after two terms, the electoral commission said Monday.

There is no obvious front-runner to replace the Nobel Prize-winning Sirleaf as head of the fragile West African state she was elected to lead in 2005 following a long civil war, one that has left deep scars on its economy and social fabric.

Elections for the presidency and House of Representatives take place on October 10 — the first time since the end of the conflict in 2003 that Liberia will be holding a vote without the presence of UN peacekeepers.

Ahead of the opening of campaigning on Monday, the UN appealed for the ballot to go ahead smoothly, urging all “to spare no effort in their pursuit of peaceful elections.”

Senator Prince Johnson — a one-time rebel fighter filmed drinking beer during the notorious murder of former president Samuel Doe in 1990 — is standing for president for the Movement for Democracy and Reconstruction (MDR).

Football superstar and Senator George Weah will stand for the Coalition for Democratic Change (CDC) with Jewel Howard-Taylor, 54, the ex-wife of Charles Taylor, as his vice-president pick.

Charles Taylor, once Liberia’s most feared rebel fighter, is serving a 50-year sentence in a British jail for his role in fuelling neighbouring Sierra Leone’s own long civil conflict.

Two prominent businessmen, Coca-Cola executive Alexander Cummings and telecoms tycoon Benoni Urey, are standing on pro-jobs and pro-growth platforms as they aim to bring corporate expertise to the presidency.

Meanwhile, the only female presidential candidate, MacDella Cooper, is a former fashion model turned philanthropist who is promising “hope and reform” for the poor, largely rural nation.

Sirleaf’s vice president, Joseph Boakai, is hoping the record of keeping the peace will be enough to propel him to the top job, despite complaints the ruling Unity Party has failed to deliver on the economy.

The international community is preoccupied with electoral violence, however, as the underfunded Liberian security forces take over control of election security from UN peacekeepers.

“These elections and the subsequent transition will mark a significant milestone whereby a sitting President will hand over power from one elected President to another,” the United Nations Mission in Liberia (UNMIL), African Union, and regional body ECOWAS said in a statement.

“We remind political parties of their obligations to peaceful campaigning in compliance with the country’s electoral laws (and) international standards,” it added.