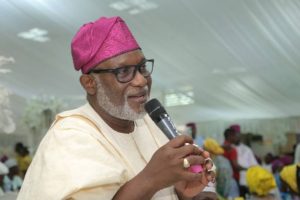 The Ondo State government has outline a total of N795 million for gift items during festivals and children’s party, as well as hosting of state guests during special events.

The figures were contained in the budget details passed by Ondo State House of Assembly on Monday, June 19.

The total budget passed by the house and signed into law is N170.1 billion.

The breakdown, which was published under Special Programmes in the 2017 estimates, has N500 million earmarked for “hosting of state guests during special events.”

The amount is more than twice what was expended for the same purpose by the Olusegun Mimiko administration in 2016, which was N201 million.

A total of N136 million was also budgeted to cater for gift items during festivities and children parties, just as N160million will go for donations.

The state government has been battling to offset a backlog of seven months unpaid salaries since it came into being in February.

It has however successfully paid two months out of the seven months unpaid salaries from the last administration.

Governor Rotimi Akeredolu has ensured the continued payment of salaries from February up till May this year.