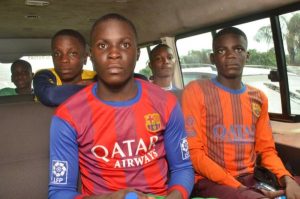 One of the freed pupils of the Lagos State Model College, Igbonla, Epe, Ramon Isiaq, shares their horrible experience in the kidnappers’ hideout.

The 16-year-old Senior Secondary School 2 pupil said the abductors exposed him and his colleagues – Peter Jonah, Adebayo George, Judah Agbausi, Pelumi Philips and Farouq Yusuf – to rains in the camp they were kept.

He said they were fed with poorly cooked food and that they were only allowed to bathe once in a week.

The children were dropped at a creek in Ondo State around 12 pm on Friday after spending 64 days in captivity.

They were reunited with their parents in Lagos later.

Their release came on the heels of fresh N5m ransom collected by the kidnappers on Tuesday at Odi-Omi community in Ogun State.

Isiaq in a brief chat with one of our correspondents on the telephone on Saturday said there were times they went hungry all day.

He said, “After they kidnapped us that day (May 25), we were kept around our school, while a (police) helicopter was patrolling the area. They asked us to hide in a bush so that people in the helicopter would not see us. In the midnight, they sent a boat to pick us.

“The following day, they gave us spaghetti. We ate the same thing in the afternoon and evening. They told us that some security men were sent to fight them, but they killed the men. They threatened that we would die there.

“We were seven in an uncompleted building. The seventh person is a man that was looking after us. It was a bad experience. We didn’t enjoy our sleep. We always prayed that rain would not fall. If rain fell, it would beat us. Sometimes, they didn’t give us food; at times they gave us food once in a day. At other times, they wouldn’t give us food at all. We ate together. We bathed once or twice in a week.”

At a point, Isiaq stated that he and the other pupils complained about their maltreatment to the leader of the kidnap gang.

“After some time, I met with their boss called ‘Chief’ or ‘Chairman’ that we did not enjoy the food they cooked for us and that we should be allowed to prepare our food by ourselves. They didn’t allow us to move around…” the Lagos pupil stated as his father stopped the conversation.

The father promised SUNDAY PUNCH that Isiaq would speak more with one of correspondents about his experience later in the day.

However, subsequent calls made to the father’s telephone line were not picked.

Also, parents of the other pupils rescued from the kidnappers did not allow SUNDAY PUNCHto speak with the freed kids.

They also declined to share any experience the kids narrated to them with one of our correspondents.

After some persuasion, one of the parents who preferred to speak on condition of anonymity told SUNDAY PUNCH that her son took ill while held hostage by the kidnappers.

“We have been told not to ask them any question, except they decide to talk about their experience. So, I wouldn’t want to expose him to any danger. But so far, he told me they were moved from one camp to another and that they were cooking by themselves at a point. He also fell sick while in captivity. While the school was in second term, he was ill and was recuperating when the abduction happened. I think the kind of environment he was exposed to by those guys made him to fall sick again. He is relaxed now.

“He said one of the camps was built with straw and that the kidnappers mounted a tarpaulin to cover them when the rain was much. They allowed them to move around and did not maltreat them. One of them, (Isiaq) who can swim had started teaching them how to do so. My son told me they were wearing black clothes before they gave them the jerseys they wore yesterday (Friday). The jerseys had been collected for laboratory examination,” she said.

Meanwhile, a security source has denied that extra N5m was paid before the pupils were freed.

A top security officer who spoke on condition of anonymity told SUNDAY PUNCH that it was the extra efforts put in place by the Deputy Governor of Ondo State, Agboola Ajayi, which led to their release.

The source disclosed that Ajayi and one of his aides, both of whom hail from Ese Odo Local Government Area, with another ex-militant went to the creek on the order of Governor Rotimi Akeredolu to negotiate the release of the children with the kidnappers.

“No ransom was paid as far we are concerned. The deputy governor went into the creek with one of his aides known as Donald Ojogo, without any security detail because the militants (abductors) warned them against coming with security operatives; that if they came with security men, they would kill the pupils. He knows the terrain (of the creek).

“They also warned the government to move away gunboats of the Navy and the police from the waterways in Lagos, Ogun and Ondo states. They spoke with the deputy governor in pidgin English. They told him they were indigenes of Ondo State and that they wanted to be included in the amnesty programme of the Federal Government. They said they would release the pupils and the Federal Government too should include them in amnesty programme,” the source stated.