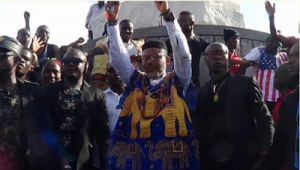 The leader of the Indigenous People of Biafra, Nnamdi Kanu, has continued to insist that there won’t be any elections in the South-Eastern States by 2019.

Kanu, who spoke in Owerri on Friday, insisted that there would be no election in Anambra State in November and in the other four South-East states in 2019.

The IPOB leader said power devolution to states and restructuring would not solve the problems of the country.

He said, “We are in the land of Biafra. I have come to Owerri to spread the good news of the coming of Biafra Republic. I don’t want you to be deceived. Restructuring does not have any meaning. I want you people to go and tell Ohanaeze Ndigbo that. There is no freedom in Nigeria. All their children are abroad studying and enjoying a good environment.

“Tell Rochas Okorocha that I am a child of God. I want people to tell him that he will leave the Government House in 2019 and go back to Jos where he came from. Let him get ready.”