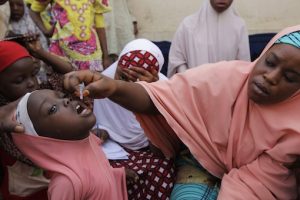 The Miga Local Government Council of Jigawa says it is targeting no fewer than 66,241 children immunisation against polio in the July round of polio immunisation campaign in the area.

The Information Officer of the council, Malam Abdullahi Yakubu, made this knwon to the News Agency of Nigeria (NAN) in Dutse on Friday.

Yakubu said the council had received 70,000 doses of Oral Polio Vaccines (OPVs) to cover the targeted number of children.

He explained that the children would be immunised against polio and other child killer diseases during the five-day exercise.

The spokesperson added that UNICEF in collaboration with the State Government had provided 80 cartons of milk, 17 cartons of biscuits, 30 cartons of sweet and one carton of whistle 19 to be distributed to children during the exercise.

He also disclosed that the council had provided 20 cartons of sweets to woo children participate during the house-to-house immunisation.

According to him, the council, under the supervision of its Health Educator, Alhaji Sule Shehu, had conducted sensitisation campaign on the need for parents to present their children to be immunised against the polio virus.

Yakubu added that the council had also conducted a community dialogue in Gwari and Shumawa villages in order to address the issue of habitual noncompliance by some households.

He said that arrangements had also been made to disseminate key messages to the affected communities using town criers and through weekly sermons at Juma’at mosques.

The spokesman noted that series of advocacy visits were paid to religious leaders, traditional rulers as well as government officials to seek their support and cooperation for the successful conduct of the exercise.

NAN also reports that the polio immunisation for the month of July would be flagged off in all the 27 local government areas of the state on July 8.