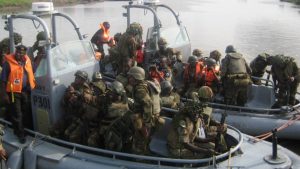 Operatives of the Joint Task Force has rescued some oil workers and security escorts abducted by the Boko Haram insurgents during an oil exploration mission to the Lake Chad Basin on Tuesday have been rescued.

The military led an operation with some members of the Civilian JTF to the area after they got the news of the abduction.

The rescue operation was successful as several insurgents were killed and four members of the Civilian JTF, two NNPC and one officials of the Department of Geology, University of Maiduguri, were rescued from the insurgents.

The insurgents had laid an ambush around Jilli and Bornoyesu villages between Magumeri and Gubio Local Government Areas of Borno State on Tuesday during which the oil exploration  team to Lake Chad Basin were attacked and about 40 persons were reported to be missing.

The military after the news of the abduction swung into action, deploying the troops of 5 Brigade, Gubio into action.

The team, who worked in conjunction with the members of the Civilian JTF pursued the insurgents, killed scores of them and wounded many that fled.

It was learnt that the rescue team was led by the Brigade Commander, Brig. Gen. Aminu Chinide, and the leader of the Civilian JTF in Gubio, Bulama Bukar Maradona.

They were supported by the Borno State Commissioner for Local Government and Chieftaincy Affairs, Usman Zanna and the Caretaker Chairman of Gubio LG, Zanna Modu.

The rescue team was also able to recover several arms, ammunition and four vehicles belonging to the victims.

Confirming the success of the rescue to journalists on Wednesday, the Caretaker Chairman of Gubio, Modu, in a telephone interview with one of our correspondents, expressed happiness that almost all the insurgents who partook in the attack were neutralised by the troops.

The chairman said, although, detail of the number of casualties from the side of the terrorists was devastating, he would not want to preempt a statement security operatives would issue on the incident.

He insisted that many of the victims were rescued during the joint operation on Tuesday night.

He commended the commissioner for giving him the directive that was acted upon on Tuesday which led to the successes recorded by gallant troops of ‘Operation Lafiya Dole’ and members of the Civilian JTF.

The two soldiers were reportedly boarding a commercial vehicle to an unknown destination, when they were found with the ammunition.

The court said the charges that bordered on unlawful possession of fire arms were punishable under Section 27 (1) (a and b) (i & ii) of the Firearms Act.

The President of the Court, Lt. Col. Adamu Hassan, said the decision of the court came after close of submissions by both the prosecution and defence counsel.

He said the prosecution proved the case beyond reasonable doubt in line with the burden of proof on the prosecutor.

According to a statement by the 7 Division’s spokesman, Lt. Col. Kingsley Samuel, another soldier, Corporal Garba Saidu, was sentenced to 10 years imprisonment by the court for unlawful possession of ammunition.